2020: J J just celebrated 6 years since his last race on April 5, 2014.  He is fat and happy this spring.  There are 3 mares in foal to J J this year — a Pioneerof The Nile mare who is due any day, a Stormy Atlantic mare, and the Garnered mare Sydney’s Astral Hat, dam of J J’s two time winner The Astral Rascal.

J J’s has four 4YOs — The Astral Rascal, winner of a MSW last year, and J J’s Pearl are both taking a break from training.  J J’s Pixie Dust and Da Lucky Charm continue to train towards their first starts.  Sadly, J J’s filly Satan’s Last Train passed away in March.  Satan’s Last Train, whose barn name was Rode (after the vet who helped her when she was a foal,) earned $11,871 in her career.  In her last start on February 7, 2020, she almost broke her maiden, coming in a close second.  RIP, Rode. 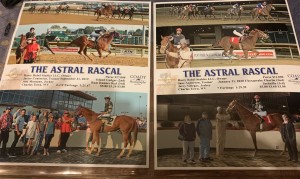 2019: J J will be moving for the breeding season to DMC Stables in Berryville, VA.  J J spent a little time at that farm back in 2014 after his trip north from Florida.  He is looking forward to both the girlfriends and the carrots that await!

His five 3YOs continue to do well in training.  Satan’s Last Train is his first runner and The Astral Rascal has had some good works at Charles Town.

2018: J J continues to live a relaxed and happy life in Virginia.  His 2YOs are all doing well in training.  Put them in your Stable Mail!

2017:  Three of J J’s yearlings hit the shows in August and September — Da Lucky Charm won the colt/gelding class at the WVTBA show and was Champion yearling and J J’s Pixie Dust won the filly class and was Reserve Champion yearling.

July 2016: J J had a great day when fans Kim and Larry came to visit from the Charlottesville, Virginia area.  They brought lots of treats — carrots, mints, and one of J J’s favorites, Stud Muffins.  He really enjoyed the attention while the humans all reminisced about J J’s days at the races. 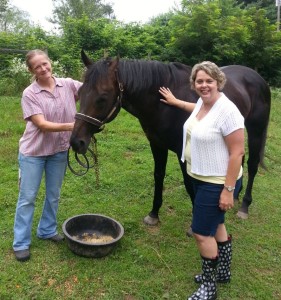 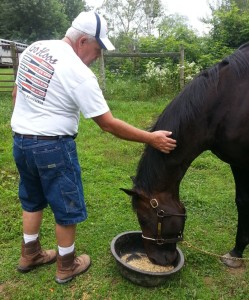 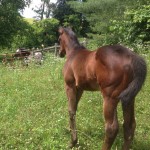 June 2016: Happy Father’s Day to J J!  J J has his own pasture but can look over the fence to another field where he can see his filly Pearl, her dam Honor Student and three other thoroughbreds.  You can see him in the back left of this photo, covered up in his fly mask and fly sheet (he hates bugs!)

May 2016: J J arrived home to Floyd, Virginia, on Memorial Day weekend.  It is great to have him home again!

J J’s Lucky Train’s fifth foal was born on May 16.  He is a chestnut colt bred in WV by Jack and Jane Harper and is out of their good racemare Sydney’s Astral Hat.

J J’s 2YO half-sister was entered in the Barretts May Sale, hip number 27, and worked a quarter in 21 3/5 but was withdrawn. 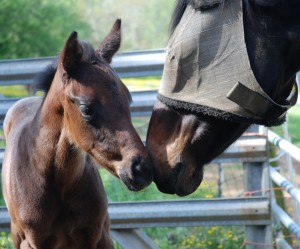 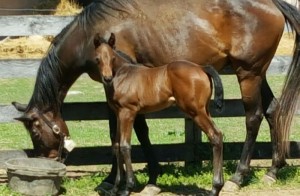 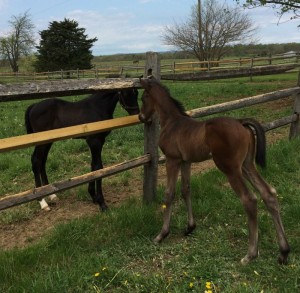 April, 2016: The last few days have been very exciting as J J’s first foals arrived in a gang!  All are looking great!  Three are West Virginia breds, one is a Virginia bred.  Follow on Twitter @JJs_Lucky_Train to see new pictures. 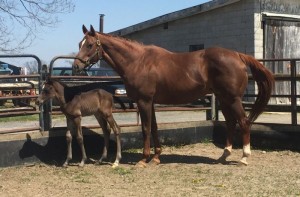 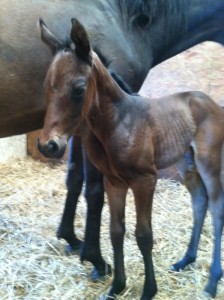 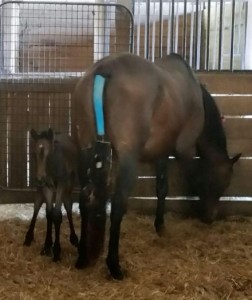 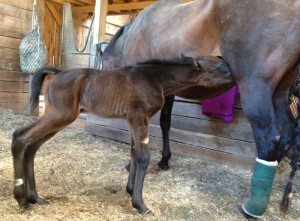 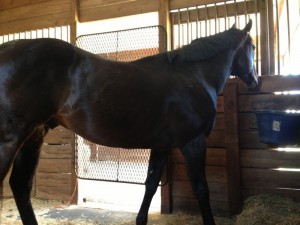 settled right in to his new stall in the stallion barn.  The facilities at Little Hawk Farm are set up nicely for both the horses and their handlers — the four stall stallion barn is adjacent to a spacious, open breeding shed.  Paddocks for the boys are right outside.  The main barn has plenty of large stalls for mares and foals and is already buzzing with activity as this year’s foals are welcomed.  Mares will be arriving from Maryland and West Virginia to see J J in the coming weeks.  Anyone in the area is invited to visit by appointment, farm office phone: 804-784-0595.

February, 2016:  February is all about waiting.  J J’s Lucky Train will be moving to Little Hawk Farm in early March.  We still have to wait a while for J J’s first foals to arrive — the first due date for a J J foal is March 31st.  If you are interested in receiving updates on J J and pictures of his foals, follow on Twitter @JJs_Lucky_Train

January, 2016: There is a new, in depth stallion profile of J J’s Lucky Train that is available on Jared Gollnitz’s Breed for (Classic) Speed blog — check it out here.  J J is having a great winter and is looking forward to breeding season.

November, 2015: J J’s Lucky Train will move to Little Hawk Farm in Crozier, Virginia, for the 2016 breeding season.  Little Hawk Farm is conveniently located off of Interstate 64, just west of Richmond, Virginia.  The farm’s owners, one of whom is an equine veterinarian, and staff are experienced in every aspect of stallion and broodmare care.  While we anticipate that most of J J’s dates will be thoroughbred mares, collected semen will also be available for sport horse breeders. 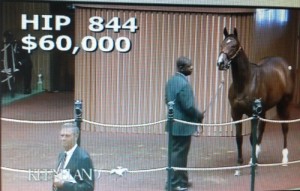 September, 2015: J J’s Lucky Train has moved to his owner’s farm in the Blue Ridge Mountains of Virginia.  He has adjusted very well to his home and has a bunch of new friends to talk with, including three other retired racehorses and a Jersey cow and steer.  Always the gentleman, J J is a pleasure to have around.

In other big news, J J’s yearling half-sister by Malibu Moon sold at Keeneland for $60,000.  Best of luck to the filly and her new, West coast connections.

July, 2015: Thank you to everyone who helped make J J’s first year at stud a success — to the owners for sending their mares, the veterinarians for all their work, and everyone at the farms for making it happen.  J J’s Lucky Train covered eight mares and seven are in foal.  We hope all the mares have a healthy year and cannot wait to see the foals next spring.

May, 2015: J J’s Lucky Train is definitely happy with his new job.  He has covered several mares now and his first date has been confirmed in foal.  He has a small book of mares this year but their quality is outstanding.  The first four mares to visit J J were all quite accomplished at the racetrack.  They include one multiple stakes winner and between the four of them had earnings of over $650,000 with 27 visits to the winners circle.  A very nice group, indeed.  The mares yet to come include a half sister to a millionaire and sire and several others from excellent families.

What sire lines do we think will cross well with J J’s Lucky Train?  You can read Alan Porter’s Stallion analysis on the Family page.  Some highlights — daughters by the following stallions and their sons and grandsons may offer good crosses: Storm Cat, Deputy Minister, Nijinsky II, Mr. Prospector, Blushing Groom, and Roberto.

Locally, there are some successful stallions that stood in WV and still have nice daughters in the area — like My Boy Adam (Nijinsky-line) and Bop (Blushing Groom).  If you have a mare you are considering sending, give Anna or Kate a call.

March 4, 2015: Happy Birthday, J J!  Yes, it’s true that all thoroughbreds officially turn a year older on January 1st, but March 4th is J J’s foaling date.  J J has been having a great winter despite the cold weather.  He looks and feels super!  He has missed a few days of turnout when the weather was especially nasty but otherwise goes out in his blanket and romps around.  Though breeding season has officially started, the lucky mares who have dates with J J are waiting until the days get a little longer before coming to the breeding shed.  He is looking forward to meeting the girls!

January 1, 2015: Happy New Year!  We are approaching the start of breeding season and anyone interested in breeding to J J this year may want to bid on a season in the upcoming Thoroughbred Charities of America Stallion Season Auction.  You can find out more here.  Online bidding opens January 5 and closes January 9. 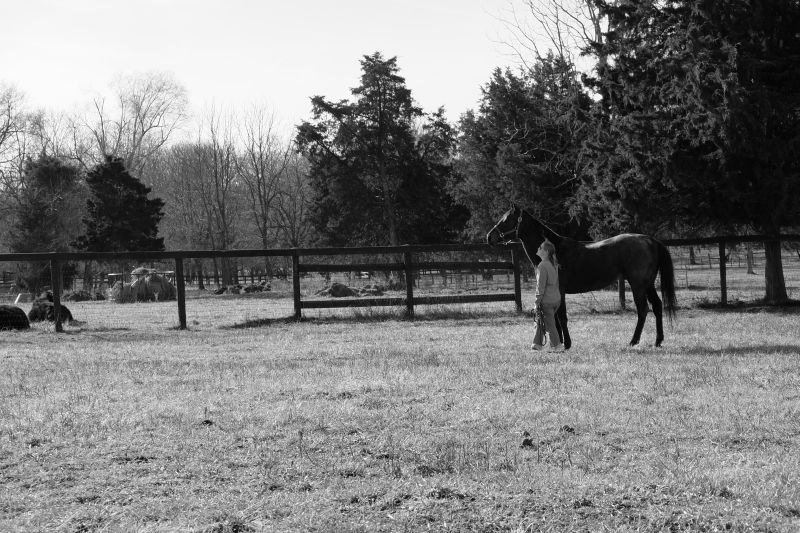 J J looks over to his cow friends 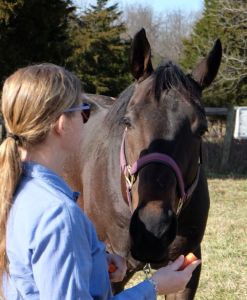 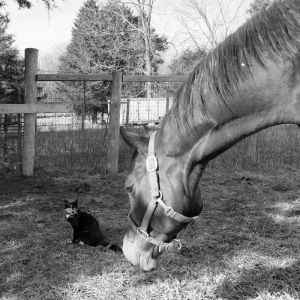 J J and his cat

December 27, 2014: J J had a visit from friends today and got some extra carrots and mints for Christmas.  There is a small group of young Angus steers in the neighbor’s pasture and J J finds them quite entertaining now.  When they first moved in last month though, he thought they were very scary!  J J has gotten used to all the critters at Blue Spruce Farm — he has goats, cats, and dogs around, too.

November 21, 2014: Steve Haskin wrote a lovely article about J J for his blog on The Blood-Horse website.  A link to the article can be found here.  I am grateful that he brought J J’s story to a larger audience and brought attention to the contributions of everyone who helped J J along the way. 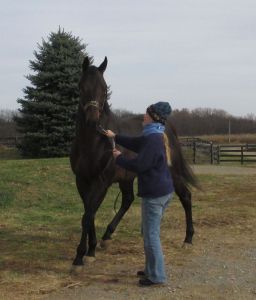 November 8-9, 2014: J J greeted the many visitors who came to Blue Spruce Farm for the W.V.T.B.A. Stallion Tour.  He seemed happy to have all the attention.